The market value of Apple, Inc. (Nasdaq: AAPL) is bigger than the entire U.S. energy sector.

Think about that for a moment.

Energy makes the world go ‘round. Apple is worth more than the entire sector combined.

I noted last week in this space that Apple scores an “A” in my Forensic Accounting Stock Tracker (FAST) software. The stock has doubled off its lows, and I made a case for why it could climb higher.

I wanted to explore this idea a bit more this week. Stocks move up and down based on supply and demand. Those laws of economics are consistent across all parts of the economy.

The demand for stocks like Apple is not always based on fundamentals. In fact, all of the gains in technology stocks last year were due to expansion in valuation. Not earnings growth. Not revenue growth. Not margin expansion. The latter would be a healthier reason for stock price increases. But stocks can also go up just because people want to buy them.

That’s the situation we are in today. There’s a lot of money flowing into exchange-traded funds (ETFs) that track major market indexes like the Dow Jones Industrial Average or the S&P 500. It’s a huge business. So much so that there are more indexes than there are individual stocks to invest in.

In 2019, total equity ETF fund flows were $162.7 billion. All of this money went into passive investments. Active managers saw over $200 billion taken away from them in 2019.

Guess what happens when passive indexes get a bunch of money in the door? They buy stocks like Microsoft, Apple, Google, and Amazon. You want MAGA? That’s the real MAGA, which even Trump highlighted this week, despite his disdain for Jeff Bezos.

That flow of money drives those stocks higher. It also tends to paste over some issues underneath the surface. Take a look at these two charts:

In fact, we are now in a situation that we have seen before. 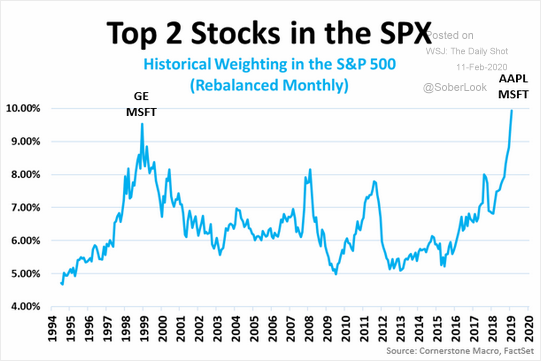 The top two stocks in the index account for 10% of the overall value. The last time we saw this was as the tech boom of the late 1990’s was peaking.

We have seen this movie before. It’s a horror movie. It ends badly. Lots of blood and guts will be spilled. It’s not that Apple is a bad company. Heck, back in 1999 GE used to “Bring Good things to Life.” But markets move in cycles. Things change. At the end of a phase, values become greater than can be justified by fundamentals alone.

We are at that stage. These stocks can continue to go up if money pours into indexes forced to buy them. But, when that stops, for whatever reason, the flip side will be ugly.

We need to be prepared for those days ahead.

In my newest book, Unbounded Wealth, I lay out a simple strategy to make gains on the upside while protecting the downside risks. When everyone is partying like it’s 1999, you’re 67% invested in stocks. When the horror film starts playing, you’re only 17% invested in stocks.

The result? About the same returns as the market over the past 40 years but with one quarter of the risk. Too many people focus on making the biggest gain. They ignore risk. Then in real-life when they suffer a 60% loss, they never want to own stocks again,

Can you suffer a 60% loss? Can you suffer three or four of them over the next 30 years? Did you jump into the market in March, 2009 when market sentiment was the lowest ever?

If not, then Unbounded Wealth can help you. Check it out here!

P.S. On Tuesday, February 25th, our colleague Lance Gaitan is holding an exciting live event to help readers learn how to uncover bigger, faster and safer profits in the tech market. These include some of the biggest investing game-changers we’ve seen since the Internet Revolution. You won’t want to miss this. Click here to reserve your seat today!

As we head into 2020 with growing uncertainty about where investments will be the safest, retirement income expert, Charles Sizemore shares the hidden corners of the market that will not only limit… Find Out More>>

John Del Vecchio is the author of the bestselling book, Rule of 72: Compound Your Money and Uncover Hidden Stock Profits and What’s Behind The Numbers: A Guide To Exposing Financial Chicanery And Avoiding Huge Losses In Your Portfolio.

As the in-house stock market guru and forensic accountant for Dent Research, John stood on the shoulders of the great David Tice, James O’Shaughnessy and Dr. Howard Schilit, and built a framework of algorithms and a multi-factor grading system that has made him one of the more successful short-sellers around.

John is also the executive editor of our Hidden Fortunes newsletter and our trading service Small Cap All-Stars.

© 2019 Charles Streeet Research. All Rights Reserved. Use, duplication, or sale of this service, or data contained herein, is strictly prohibited.